Day Ranging Chickens in the Orchard

Our Buff Orpington chickens were the first domestic animals to spend the growing season in the orchard. The first year we brooded the baby chicks, which came in the mail, on the floor of our bathroom. A heat lamp hung over them and wood shavings covered the floor. It was kind of fun to be able to watch them develop so close up, but as they got larger they created one heck of a mess. All their scratching creates a fine dust the covers everything. We moved them into the garage for a few weeks, and then put them into a portable pen that we built roughly following some of the ideas in Andy Lee's book, Chicken Tractor: The Permaculture Guide to Happy Hens and Healthy Soil, and plans and photos online at http://home-and-garden.webshots.com. We put wooden bars in the first one we built for roosts and eventually added some nesting boxes. We even added a band of electric tape around the bottom to help protect the chickens from foxes, which can be a problem in our wooded area. 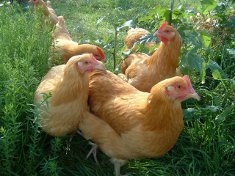 At first we followed the procedure of keeping the chickens in the moveable pen (we just call them pens—tractor has always seemed a bit of an odd name since you do the pulling and the chickens aren't driving), but we found it a bit tricky on rough terrain to keep from running over chicken's legs. Also, our orchard is quite steep and uphill pulling was a tough go. Eventually, we went to setting up a circle of electronet poultry fence around the portable pen and letting the chickens range around this larger area. The pen provides shelter for the hanging feeders and protects the birds from rain and sun. They instinctively return to the pen at night to roost. 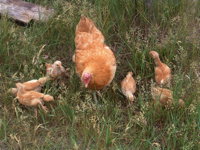 For several years we've been able to replace chickens lost to predation, natural attrition and our selective culling of non-layers with chicks raised on our farm by layers who have gone broody. It really is one of the most delightful and joyous experiences to watch a momma hen with her chicks in tow scratching around the yard. Buff Orpingtons possess enough of the urge to set to replace themselves. I don't think that's always true of breeds that have been bred for maximum egg production.

We also built moveable pens for our ducks and for the meat chickens we raise every year. For the past few seasons we've stopped moving the laying flock into the orchard and just allowed them to free range around the farmyard, returning to their permanent chicken coop at night or when ever they will. The threat from foxes seems to have diminished recently and the sheep have taken up a larger part of the orchard. The fertility that the chickens have added to the orchard has helped prepare the way for the sheep.

Over the years we've tried several different breeds for meat chickens. At first we just bought straight run buffs or other heavy breeds for both meet and laying hens. They tasted great but by the time they were of roasting size, they could be pretty tough. We were a little wary of the standard Cornish-Rock Crosses as we'd heard they didn't forage well and often had leg problems. We found a hatchery that carried a slower growing Cornish-Rock and gave them a try. They did very well and we used them until we found out about the Freedom Ranger chickens that were developed in France to meet the needs of farmers raising pastured poultry to meet the high standards of the Label Rouge free range program. We order ours from Freedom Ranger Hatchery, Inc. in Pennsylvania. They come in three different colors: redbros, yellows and tricolors and are very attractive. They are good foragers with sturdy legs, grow well, and produce some of the best tasting chicken we have ever tasted.

We try to manage it so the Freedom Rangers follow our Babydoll Southdowns in a rotation around the orchards. The chickens pick though any apples on the ground from last year that were missed as well as through the droppings from the sheep that are moved ahead of them. We've seen a noticeable jump in the growth of forage in the last few years and trying to be observant to make sure nothing gets overgrazed. It's also important to move both the chickens and the sheep out of the orchard well before apple harvest to prevent any contamination of the apples. Once harvest is over the sheep can be allowed to clean up any apple drops that remain on the ground. We like the symbiotic relationship between the plants and trees and our wooly and feathered workers. The time that we spend moving electronet sheep and poultry fencing is more than repaid by their contributions.